A Railroad Full of

cousin asked me:
"Hi Myrtle, what do you think of these floods in Germany, Austria, etc.? We thought that Calgary was terrible, but all these floods have never been as bad as they are now."

Submitted by Betty Krawczyk, Cumberland BC

ith respect and congratulations to Mayor Mussatto and the council of North Vancouver City for planning to pass a by-law banning the sale of genetically engineered ...

High on the Hog

Released by Dermod Travis, Integrity BC

erhaps it will be a leisurely cruise along the French Riviera or something more adventurous like an expedition to Antarctica.

One thing is for certain though: Port Coquitlam's former chief
administrative officer Tony ...

Save up for a composting workshop in Yarrow Sept 14

he workshop will teach hobby farmers and equestrians about manure management including composting basics ( with or without machinery), information on building a composting ...

his is our first year at Cultus which means we need all the help we can ...

he Scotiabank & BC SPCA Paws for a Cause walk is being hosted in 35 communities across the province on Sept 8 (dates may vary in some communities, please check spca.bc.ca/walk for details).

The Spectre of a Pipeline

Dig project to begin late this year or early 2014

esidents evacuated the Lanai Apts. on Cook St. Tuesday after a someone on the second floor set-off the ...

medical emergency may have been the reason why an elderly woman drove off the road and into some trees Tuesday on Juniper.

ome jobs, like bagging donuts on a production line, don't require a person to expand their educational horizon. We've all worked dead-end jobs. But for a fortunate few, the learning never stops.

On Par with the Kings of Swing

Early bird registrants save $100 until July 31

It is a fun and challenging golf tournament that will be held Thursday, August 29 at the Chilliwack Golf Club ...

lipper Freaks Pinball Club is based out of Mission, British Columbia. Our members live in various locations throughout the Fraser Valley. Our International Flipper Pinball Association tournaments ...

e Canadians are a proud bunch and we like to show our pride, but for a lot of Chilliwack residents, Monday was just too hot ...

e're not sure why a pack of ex-mayor cronies would want to hold a news conference on flood control.

They’re no longer mayors. They're not engineers. They looked more like a senate committee in charge of comedy. Here's something to think about; Why didn't they do anything about their concerns on ...

ust before 10 a.m. Saturday, witnesses made a citizen's arrest on a woman who was allegedly seen stealing from a business downtown. She was reported to have had a pair of scissors with her.

he 35th Harrison Festival of the Arts closes its 10 day run with a final weekend of exciting new music, returning musical favorites and visual arts and activities.

e have purchased a new Outrigger Canoe (OC-6) in January and can now offer our paddling ...

Pedestrians Mowed Down in Harrison

Three injured, one airlifted to hospital in serious condition after being struck by a vehicle

ragedy struck on an idyllic Sunday in Harrison when at around 1:15 p.m. a vehicle plowed into three ...

An Air About Her

'm planning a trip to Edmonton for the University of Alberta Alumni Weekend Sept 25 to 29. I graduated from the diploma nursing program spring 1944 and the BSc in nursing 1945.

18 things that every mother should know

Submitted by Betty Krawczyk, Cumberland BC

rong about what, one may ask? Actually the Mother Right I am referring to is the title of a book that was written by a guy. Stranger things have happened. His name was Johann Jakob Bachofen (1815-1887) and he was one ...

Chilliwack strikes a balance, but for how long?

hilliwack and area is benefitting from a stronger national economy, as home sales heading into the start of summer took a noticeable jump. Sales completed in June reached 215, compared to ...

n July 7, 2013 at approximately 1:20 p.m.,  Agassiz RCMP  attended to a motor vehicle and pedestrian collision at the intersection of Esplanade Avenue ...

n our ancestors time, a man named T’xwelátse ,from the Ts’elxwéyeqw Tribe (Chilliwack Tribe) of Stó:lō, was turned to stone by Xexá:ls – the Transformers.

Released by the CVRCS/Voice file

e will be hosting our second 2013 Chilliwack River cleanup on Saturday July
20th. If you are interested in participating, please be at the Great Blue Heron Nature ...

set to take another bite out of Luckakuck Creek

I write you today to bring several matters to your attention regarding the proposed rezoning of 6524 and 6536 Dogwood...

t approximately 1:30 am on Sunday July the 7th Wildfire Management Branch and the Chilliwack Fire Department and were dispatched to a report of a wildfire on Elk View Road.

Senior uninjured after being clipped by car

n elderly scooter rider tangled with a vehicle at Five Corners at around 2:30 p.m. on Tuesday. Chilliwack firefighters were ...

hilliwack firefighters were called out to the old courthouse at the corner of Victoria Ave. and ...

Boy and Girl Bands Rock the

hen you bring in the big acts, you get the big crowds. Estimates were that as many as 10,000 people looking to party hit Central Community Park Friday night as the highly anticipated summer ...

almart became the latest supermarket to feel the heat when the Chilliwack chapter of the Salmon Feedlot...

Let your kids learn from an expert on how to avoid being abducted July 22 free!

BC Liberals take over half a million dollars

ome of Canada's provincial political parties have developed an unhealthy dependency on large campaign donations from Big Pharma, according to figures released by IntegrityBC. 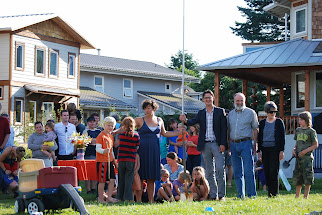 n Friday, July 12 Yarrow Ecovillage held a groundbreaking ceremony for its next phase of housing. The eighteen units to be ...

wenty-five people participated in the Open Net Feedlot Salmon Boycott at the Eagle Landing Wal-Mart outlet in Chilliwack, BC.  The event was successful in raising awareness about the high levels of contaminants in open ...

Toward a Crime Free Community

raser Health is the first health authority in B.C. to hire a full time Registered Nurse for the Baby Friendly Initiative.

Sidney Harper, who has been been working with mothers and babies over most of her ...

f you have young children, you don’t want to miss this opportunity to meet with early childhood exhibitors, entertainers, authors & leading researchers in your own community.

Released by Jamie Leggatt, the City of Chilliwack

year ago, the City of Chilliwack made a small change in its tire purchasing policy for fleet vehicles that significantly benefitted both the environment and the City's pocketbook. Instead of buying new tires for larger fleet vehicles and equipment, the City started having those tires re-treaded for reuse.

he Variety Club recently presented the Fraser Valley Health Care Foundation with the keys to a brand ...

Take the survey for a free body sugaring session

s many of you may know already, I am in the process of opening a new business in Chilliwack - Sugar'd. Body Sugaring is the worlds oldest method of hair removal, and it is truly "the nicest way to pull hair from your body!"

he BC SPCA is holding a special adoption promotion featuring half-price adult cat adoption fees from July 18 to 31 in response to the overwhelming number of felines in care at its shelters. Currently there are 743 adult cats being cared for at SPCA ...

ward-winning Canadian worship artist Jon Bauer releases indie/folk/worship project Roots of Worship today. The album features Bauer’s favorite choruses and hymns—timeless songs that he performs while on the road as a full-time touring ...

May the Paint Be With You

raham Lackey, age 46, is a high risk repeat sex offender and is the subject ...

A Little Bit of Country

Party in the Park No. 2 features western music

he woman standing next to the stage quickly scribbled something down on a pad of paper.

t was a hot Tuesday evening, no doubt better spent by the banks of the ...

mbulance paramedics were dispatched to a home in the 9700 block of Harrison St. after a man in his early 40's dove head-first ...

he AH Lions Club invites you to their annual car show. Come see some great cars old and new.

he Annual Gathering is this Saturday July 27th from noon - 3pm on the Coqualeetza Grounds at Stó:lō Nation. We aim to share and celebrate achievements, while providing an opportunity to showcase Stó:lō Nation programs and services.

t approximately 8:00 a.m. on Sunday July the 21st., the Chilliwack Fire Department and was dispatched to a report of a structure fire in the 45000 block of Trethewey Avenue.

When the fire crews arrived they observed fire ...

Submitted by Tom Timmerman, DualSport BC

irt Bikes, Quads, SxS and 4x4 clubs are gathering together at Chipmunk
Creek in the Chilliwack River Valley Saturday July 27 2013 to finalize the construction of the Chipmunk Creek ...

hether you’re spending your summer vacation relaxing in your backyard or adventuring into the B.C. wilderness ...

f you missed the hunt at Heritage Park, then you missed a lot of fun at our 1st Annual Treasure Chest.

Back to the Garden gallery show on until September 7

ary Chalmers Main, from the Chilliwack Visual Artists Association sent the Voice some photos of their show called Back to the ...

t approximately 11:00 am, firefighters from Chilliwack Fire halls 1, 3, 4, and 6 responded to a structure fire in the 44000 block of Simpson Road. Upon arrival, fire crews saw smoke coming from the roof and vents of an industrial feed mill.

s August 7, 2013 is the 50th Anniversary of the opening of the Ryder Lake Hall we felt it was appropriate that we hold a Pot Luck dinner in the evening after the Flea Market to celebrate this milestone. Dinner at 6:00pm.

t's official now. Premier Clark was sworn-in as a Member of the Legislative ...

High energy at Party in the Park No. 3

fter the third event, Party in the Park has settled into its regular summer cadence, and last Friday ...

Due to a technological glitch,

the archives prior to the

above month were lost.

We apologize for the